8th Day into our trip

So much has happened I don't know where to start from my last blog on 1 October. The finally to the Celebrations was on Sunday 2nd Oct. What a day a 7 hour service in 100 degrees, hot, hot, hot. I was privileged to assist with the Holy communion and I lost count of the hundreds I offered the bread to and children I blessed. I think it was an unusual experience for them to have a white women priest. Songs were sung, words were preached, distinguished guests from the government and local councils spoke and then the greatest shock was when I was called to the alter by the Bishop Jacob to be extended the honour of becoming a Canon of All Saints Cathedral, Mpwapwa. This was in front of over 1000 people, children and guests. WOW! and then I had to speak to them. I am just so pleased that I was not informed beforehand that this was going to happen. I shall never forget this day. 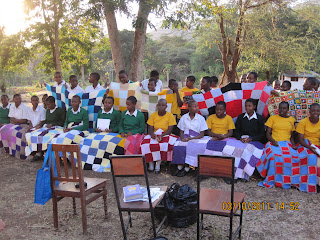 Girls at Queen Esther's received blankets give by St Luke's, Sevenoaks.
The next day up bright and early to go to Queen Esther's Boarding School for girls which is a diocesan school. I had to take them through a 'Parenting & Relationship' course which was quite a challenge but some home we came to understand each other and followed all the hard work with songs and dance let by other members of the team. Sylvia is particularly good at this. The following day back to the school for Linda and I to talk to them about the importance of keeping their bodies fit and to have regular exercise. We then,lead by Linda, took them through an aerobics and circuit routine in 100 degrees on uneven bumpy ground. It had to be seen to be believed. We had a great time, soaked through may I add and they are now going to have this part of their curriculum including the Parenting course. Yesterday another fantastic experience travelling to three churches, Berege, Chetimo and Nyhnilia. Everywhere we were met with singing and dancing from the Mothers Union and the children. the churches were full and we were introduced to all the elders, committees, teachers etc, entertained with more singing and dancing. The children are just so amazing in their performances and of course everyone wants to feed us! We went to view land that has been given to Chitemo and Nyhnilia by the government to do with as they please which is a great gift to them. The day was concluded with a meeting with all in authority in Chitemo and Nyhnilia to discuss the plans Seeds$Tanzania have to build a school half way between the two for the pre-school children and the 300 plus orphans to attend for activities and education. We sat in Chitemo church at 7.30pm last night with no lighting except two torches and listened to their report of what they have planned since I last spoke with them, what they have spent their money on which was donated by All Saints Church in  Rochester Diocese and then I had the opportunity to share with them my thoughts of how we shall move forward with this project. It is all very exciting and much work will need to be done by the villagers and of course 'Seeds' to raise funds to complete this project. The most important point is the relationship and friendships that we are forming with the people. It is so heart warming to find they never forget what one has said previously which may be many months ago and any little gifts that were given are their proudly displayed in the church. These are very special times for us. I apologies if my grammar is all over the place but I have to rush so before the power goes off!! 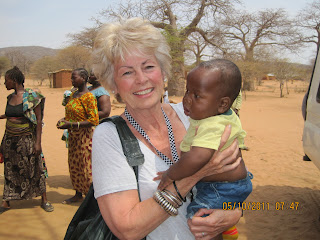 One of my many babies - the future of this country.
Posted by Rev. CanonYolande Marcussen at 03:40