Some time again I was speaking with a friend, Angela, about the little churches in our villages of Chitemo and Nyhinila and how simple they are in building and interior accessories.  For one thing the altar is but a simple table with a very worn, what was once white, cloth to cover it.  No altar adornment Fontals that we see here in our churches.  Angela asked whether I would like her to make something for the altars.  Of course the answer was yes and I expected her to hem a white sheet that would be large enough to cover the altar table from top to bottom.  On Sunday after our church service Angela handed over her altar Fontals and what a wonderful surprise.  She had made from old curtains two beautifully adorned items for the altar tables in these little churches.  The Pastor,his team and the congregation will be so thrilled when I take them  in June.  Never had they had anything so grand for their churches. There will be much celebration.   It was Angela who also funded the making of baptism fonts for the churches when only a basin was used before.  I am not saying that it is necessary to have these accessories for people to be fulfilled in their worship but we all know that it can be  pleasing to the eye, the heart and lift the spirit. Also a retired priest in our Diocese is now a potter for relaxation and he lead a quite day for lent and used some of his pottery as images.  At the end of the day we took some items home.  I chose a prayer cup and have now been given another cup with two prayer bowls.  These will now go out to the villages churches and can be used for the wine and wafers used in Communion.  I know that the people will really treasure their altar Fontals and the pottery. 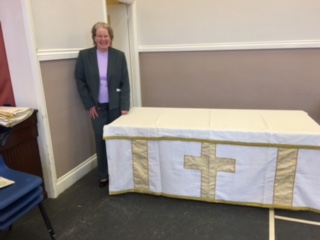 Angela with an altar cloth 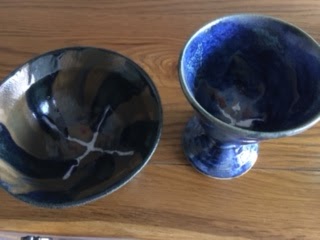 A prayer cup and bowl


Posted by Rev. CanonYolande Marcussen at 04:16 No comments: