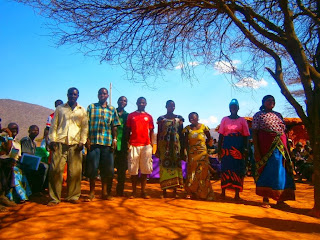 More good news a water-bore hole committee has been formed.

During her visit in October 2013 Rev Nicky Teverson, trustee of SEEDS4Tanzania visited the District Water Engineers office to sign in and pick up Mr Mazola the Engineer, who joined her to  visit The District Commissioner and President of Mpwapwa. Both were required to hear the request to install a water bore hole and give their blessing.


She then travelled to Nhyinila where the bore hole is to be situated and met with Pastor Festo, his elders and community who were gathered under the tree by the Chapel.  Four hours were spent hearing introductions, the school building project details and the water engineer empowering the people to take ownership of the water project. As a result a water committee was elected and an allowance towards the survey started. The people one by one pledged an amount of money by offering to sell their chickens and cow and other provisions; by the end of the afternoon they had raised 415,000 TS. The aim is to raise £1000 by January to pay for the survey and then they will have some idea of the cost of the hole.
Photographs were taken of the school buildings and a summary was given to Nick outlining what has been achieved and what still needs to  be done. 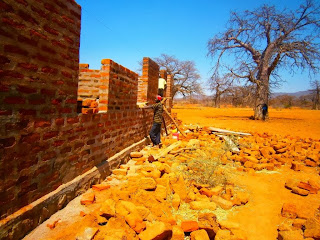 Great news - we are on target with the building progress.  Rev Nicky Teverson visited the villages of Chitemo and Nyhinila and took our latest photographs of the pre-schools. It is now the rainy season and this may halt the building until the end of the rains in April 2014. We had hoped that the roofing structures would be in place before the end of 2013 - we have to wait and see!! Its looking good.