If you would like any more information our email address is

A big thank you to all who are showing an interest and support  for 'seeds4tanzania'.  I am hoping to have a website up and running in the new year which will be  updated with news and the blog will also continue to be  updated. The building of the pre-school will be a long term project. Africa itself is a challenging country to be working in. The lack of rain, poor communication systems do not help but thankfully having established firm relationships and friendships with the people involved in this project I have no doubt that we shall see the project move forward during 2012. I shall be returning at the end of June 2012 and hope to bring back evidence of developments.  Keep in touch and do try to make comments. Yolande mobile 07794151635
Posted by Rev. CanonYolande Marcussen at 13:23 No comments: 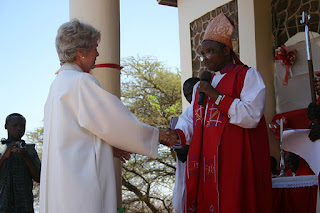 'You are now a Canon!'
‘Come on and Celebrate'
and so they did - for seven days!!
During our visit to Mpwapwa Diocese, Tanzania, our team of five representing Rochester Diocese Overseas Links was invited by Bishop Jacob Chimeledya to attend the 20th Anniversary celebrations of the diocese.
In the U.K. we might stretch holding such an event over perhaps a weekend but in Africa if you have something to celebrate then it is in African time, which just goes on and on. What a wonderful experience it was for us all.
Although we were present for only five of the seven days - from 10.00am until dark we worshiped with song and dance performed by groups of the very young to the very old from around the diocese. The words of the songs were always very moving relating to text from the Bible, situations in their lives and always reinforcing their strength of faith and total trust in The Lord.
During the week the first and now retired Bishop of the diocese, Bishop Simon Chiwanga, gave an address on the history of the diocese and the facts were staggering as to how quickly it had grown in every respect, from number of Christians, churches, pastors, evangelists, catechists and of course annual budget which nevertheless remains insufficient to meet their growing needs.
Addresses were also given by various dignitaries within Tanzania and an evangelist named Daniel preached everyday for at least 1 ½ hours standing in the blazing sun. He hardly drew breath and there was never a memo to be seen. The congregation usually over 1500, plus children, would sit all day with only a short break for lunch, worshiping and showing their enthusiasm for everything that was going on and never looking at a watch or worrying when they were going to eat or have something to drink. An unusual occurrence during the celebration proceedings happened on the 6th day, Saturday, when over three hundred bras, which we  took out were lined up in the Cathedral to be distributed amongst the women. Bras are a luxury and the women were thrilled with their gift. During our subsequent visits around the diocese we had women run up to us and lift their top to show their new bras.
Each day included a time of offering and it was moving to see people who had very little, give and give and give whether is was a coin, some nuts, a piece of cloth, a chicken or from the wealthier a goat.  It brought to mind ‘The Widow’s Mite’.
The climax of the celebrations was on the Sunday when a huge congregation attended the service which lasted for 7 ½ hours including Holy Communion. It was a great privilege to be part of the administration of the sacraments and Linda from our team delivered the Gospel reading in Swahili.  It also came as a complete surprise when I was honoured to be made a Canon of All Saints Cathedral, Mpwapwa.
We returned to the U.K. two weeks later having travelled many miles around the diocese renewing friendship, reviewing projects and establishing new ones.  We are always received with such joy, generosity of spirit and love. A priceless gift to receive and shall never forget the 20th Anniversary of Mpwapwa Diocese.
‘There are hardships that nobody reckons,
There’s the valley, and plain, and the hill,
There’s a land, oh, it beckons and beckons
And I want to go back, and I will’
Simon E. Chiwanga 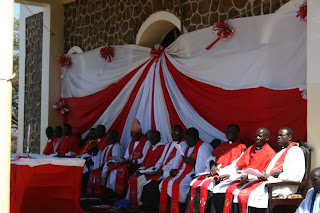 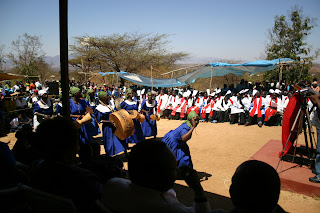 Posted by Rev. CanonYolande Marcussen at 12:00 No comments: 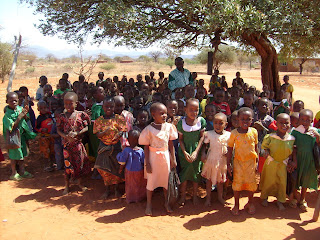 The orphans of Chitemo and Nhyinila
I and my three co-trustees (Rebecca Day, Linda Wanniaratchy,Nicky Teverson)  have recently received the exciting confirmation that 'Seeds for Tanzania' is now a registered charity. Four years ago when I first travelled to Tanzania, amongst my many travels around the diocese of Mpwapwa, I visited the villages of Chitemo and Nhyinila. I was welcomed by a large group of singing children, approximately 300, tots to 7 years of age. I later found out that they were all orphans. Their parents had died mainly from either Aids, dysentery, malaria or in childbirth. In Africa orphans have a tough life often left to fend for themselves from a very young age.  In the two villages the churches do what they can but they are unable to fund the childrens’ needs on a regular basis which means that it is left to the villagers, who themselves are very poor.   Unfortunately pre school facilities are unavailable until the age of 7 when they will attend a government school.   Before that the orphans are looked after by volunteers who attempt to give them activities and a form of education- all done outdoors with only a tree for shade. “Seeds for Tanzania” wants to change this.
When I left Mpwapwa that year I took a picture of the orphan children which has remained on my laptop and in my heart. After much thought and prayer I felt I had to try and do something for them. I believe that if they are to have a future it will be through education. Education will give them the skills that will enable them to move on in their lives and contribute to their communities. This needs to start as early as possible so that when they do move onto primary education they will stand more chance of developing in the basic skills.
The government has donated 50 acres of land which lies in between Chitemo and Nhyinila and this will be the ideal location to build a pre-school. It would be wonderful for the children in the 3 to 7 year age group to have somewhere to call their own for activities and education. The people understand that they must take ownership of this project and with the churches acting continuing to act as overseer they have organised a project committee and a bank account has been opened. They will make the bricks, dig the foundations and build.  The charity’s role will be to fund the training of teachers, to assist with building materials such as cement, nails and roofing. Also teachers will require equipment and the means   to sustain themselves and develop their own self reliance.  This is a long term project and whilst sometimes I wonder if it is possible I do believe that God never asks us to undertake anything that is beyond us, although it may be a great challenge. Funding will be closely monitored through our close links with the churches and monies will only be provided when evidence is produced that the next stage of the project is required.
If you feel you would like to support this project and by doing so make a real difference to the lives of these children please contact Rev Canon Yolande Marcussen
07794151635 –email seedsfortanzania@gmail.com
Posted by Rev. CanonYolande Marcussen at 11:50 No comments: